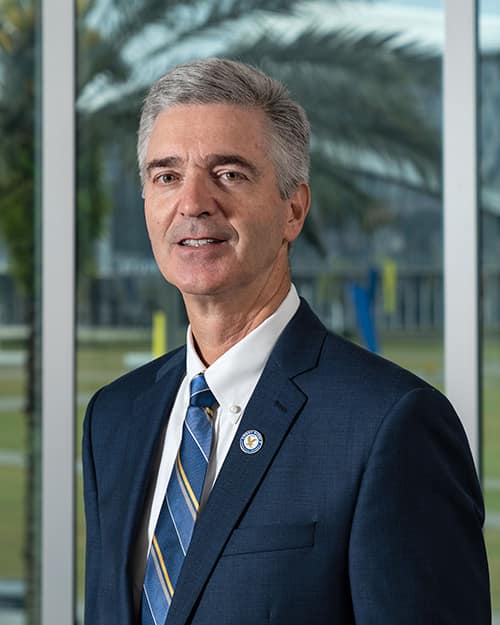 Embry-Riddle Aeronautical University offers more than 100 bachelor’s, master’s, and Ph.D. degree programs in its colleges of Arts & Sciences, Aviation, Business, Engineering, and Security & Intelligence. Embry-Riddle educates more than 34,000 students annually at residential campuses in Daytona Beach, Florida, and Prescott, Arizona, through the Worldwide Campus at more than 135 locations in the United States, Europe, Asia, and the Middle East, and through online programs.

Under his presidency, Embry-Riddle continues to expand discovery-driven degree programs and its research park is home to new aerospace patents, technology transfer and startups. Butler has encouraged collaboration with industry, resulting in expedited hiring initiatives with leading aviation and aerospace industries. He is expanding the university’s interest in aviation cybersecurity, aviation data analytics and autonomous vehicles. The university also created new partnerships to prime the aviation/aerospace pipeline.

As a strong advocate for science, technology, engineering and mathematics (STEM) education, Butler supports a dual-enrollment program with the Gaetz Aerospace Institute. The institute offers more than 40 university courses to students in 84 Florida high schools. At the Arizona Campus, the STEM Education Center serves as a hub of enrichment for students, faculty, researchers and the community.

Previously, Butler was Executive Vice President and Provost of the University of Iowa. He was responsible for more than 100 academic programs in 11 colleges. For ten years, he served as Dean of the College of Engineering.

Butler is on the board of the Hoover Presidential Foundation, the Veterans' Advisory Committee on Education and The Wings Club. He is a member of The Civic League of the Halifax Area. He is a private and glider pilot.

Testimony before the Committee on Science, Space, & Technology, United States House of Representatives, May 6, 2021

Testimony before the Committee on Science, Space, & Technology, United States House of Representatives, May 6, 2021

State of the University

See how to contact the staff in the Office of the President.