Bachelor of Science in
Space Physics

By pursuing this degree, students are empowered to explore the fundamental forces in nature through investigating atomic, nuclear and elementary particle systems.

Embry-Riddle’s Bachelor of Science in Space Physics is the only undergraduate space physics program in the U.S. It is designed for students with superior math and science skills who have a strong interest in space-related research. Space Physics majors work under the direction of research-active physicists who share their passion for understanding the universe. The Space Physics program at ERAU engages students in the scientific side of space exploration through studies of the Earth-Sun environment, atmospheric sciences, aurorae, planetary sciences, laboratory plasma physics, and exoplanets.

A Space Physics degree provides a strong experimental physics background, so graduates emerge from the program ready to work in basic or applied research or within the rapidly expanding commercial space industry. Graduates of the program are also well-prepared for careers in medical physics, biophysics, plasma physics, and in the military and security sectors.

Even as an undergraduate, students have the opportunity to participate in a variety of faculty-sponsored research projects, most of which are supported by grants from NASA, the National Science Foundation, and other funding agencies.

Students at ERAU can join a number of campus organizations and clubs to begin professional networking and fully immerse themselves in the field. Examples of these include the student chapter of the Mars Society, Society of Physics Students, and Sigma Pi Sigma, the national physics honors society.

This offering is available at the following campuses. Select a campus to learn more. 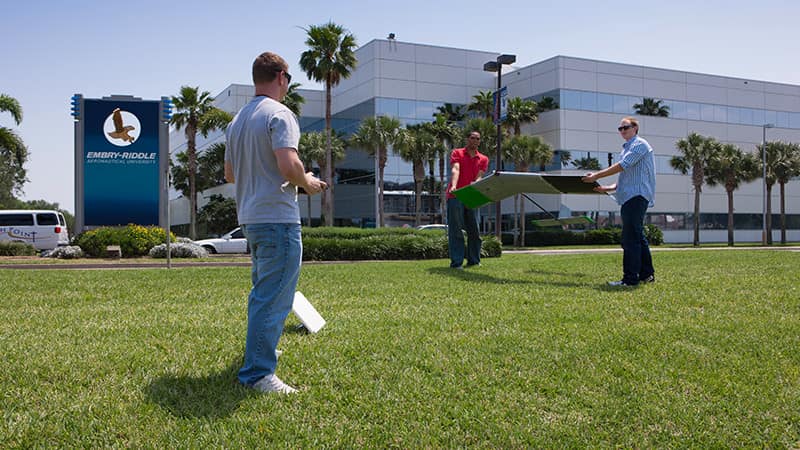 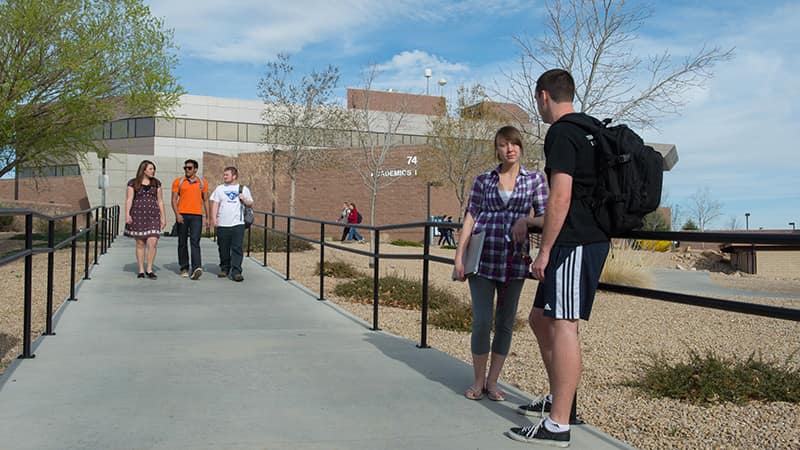 About Space Physics at the Daytona Beach, FL Campus

Part of the Department of Physical Sciences in the College of Arts and Sciences, the B.S. in Space Physics degree program emphasizes the physics of the solar-terrestrial and distant-space environments.

Students learn how to study the magnetic and electric phenomena that occur in outer space, in the upper atmosphere of planets, and on the sun. In the field, space physicists use ground-based instruments, balloons, rockets, satellites, and deep space probes to study these phenomena.

ERAU’s Daytona Beach Campus is located just 50 miles north of Kennedy Space Center, which is the epicenter of Florida’s Space Coast. Students can witness launches from campus by just stepping outside and looking southward.

The Daytona Beach Campus location places ERAU in close proximity to much of the activity surrounding the next generation of space exploration missions.

A typical first year will include General Education courses plus core work, such as Current Topics in Space Science and Foundational Math and Science courses.

The program shares its facilities and some course work with the highly successful Engineering Physics program, one of the largest of its kind in the U.S.

Students can take courses at the Kennedy Space Center via the Florida Space Institute, of which ERAU is a member. Or take special tours of space facilities with classes or clubs, participate in co-ops or internships, and attend space launches.

Six out of seven professors in the BSSP program are full professors and four are recipients of the National Science Foundation Early Career Award. The BSSP program has a critical mass to accomplish any research in the Sun-Magnetosphere-Ionosphere-Thermosphere Coupling.

END_OF_DOCUMENT_TOKEN_TO_BE_REPLACED

Estimate your tuition by using the Tuition Calculator

Learn about our General Education

Find out about transferring credits to this degree

END_OF_DOCUMENT_TOKEN_TO_BE_REPLACED

Luca Guida was just 12 years old when he took his first college course. “When I first went to our local community college, some of the professors saw me walking around and thought…
END_OF_DOCUMENT_TOKEN_TO_BE_REPLACED

Taylor M. Yow set her career path in high school. More than anything, she wanted to become an engineer, working on spacecraft and orbital calculations. She didn’t realize just…
END_OF_DOCUMENT_TOKEN_TO_BE_REPLACED

A total of 915 students from the fall 2022 graduating class walked the stage this past week to earn their diplomas at Embry-Riddle Aeronautical University commencement ceremonies, held…
END_OF_DOCUMENT_TOKEN_TO_BE_REPLACED

Embry-Riddle Aeronautical University students are designing a rocket that can soar through the Earth’s atmosphere and reach outer space, only to be recovered through a parachute…
END_OF_DOCUMENT_TOKEN_TO_BE_REPLACED

Alumna Engineer Served in Launch Room for Artemis I

Alora Mazarakis (’21) will have something unforgettable to be thankful for when she joins her family for Thanksgiving next week: a successful Artemis launch. On launch day, you…
END_OF_DOCUMENT_TOKEN_TO_BE_REPLACED

Changing the Future of Space Travel

For many, the pandemic presented an opportunity to take up hobbies and interests both old and new. For Space Physics alumnus Dr. Erik Lentz, it was the perfect time to pursue his dream research project.

About Space Physics at the Prescott, AZ Campus

The Bachelor of Science in Space Physics degree program lets students explore the fundamental forces in nature through investigating atomic, nuclear and elementary particle systems. This applied physics program is designed to produce graduates prepared for space and aerospace-related careers. Working with a dedicated faculty with state-of-the art labs and equipment, students graduate prepared to promote the exploration of space and add to the body of knowledge in science. Because of the strong emphasis on experimental physics, graduates are well-suited to enter a variety of fields in industry and graduate programs. In addition to employment in research and the space program, graduates with physics degrees will pursue diverse space physics careers in fields such as medical physics, biophysics, plasma physics and other areas that utilize physicists, such as the military and security sector.

The Bachelor of Science in Space Physics degree is housed in the Department of Physics in the College of Arts and Sciences.

Students can choose from three areas of specialization:

At the Prescott Campus, students are immersed in designing experiments and building the equipment to conduct their research.

You’ll have extensive opportunities to work closely with dedicated faculty and participate in hands-on experiences at our state-of-the-art campus observatory and labs. The clear air of our mile-high campus provides excellent viewing capability from our 12-inch Schmidt-Cassegrain telescope.

The Prescott Observatory Complex was ranked among the Top 25 Best College Astronomy Observatories according to CollegeRank.net. The Radio Observatory consists of several radio dishes and antennae, each connected to specialized receiving and analysis equipment.

The Bachelor of Science in Space Physics is a 120 credit hour program that can be completed in eight semesters. The list of courses below comprises the complete requirements for the degree of Bachelor of Science in Space Physics. The list is organized as a “vertical outline” according to the year in which the courses would normally be taken. While it is not a requirement that the courses be taken during the year shown, students should be aware that several courses in each academic year may have prerequisites and/or corequisites. Therefore, it is recommended that students keep their schedule as close as possible to the one shown below. Before registering for a course, check the course description section of this catalog to ensure that all prerequisites and/or corequisites are met. It is recommended that students earn a C grade or better in the prerequisite courses. Students must have a minimum cumulative GPA of 2.0 in core PS courses.

Students may not pursue both a Space Physics B.S. degree and an Astronomy B.S. degree. However, also note that the degree requirements for the first three semesters of both degree programs can be satisfied with the same courses. Thus, a student who is making appropriate progress in either the Space Physics or Astronomy degree programs can switch to the other program after the third semester with a complete transfer of credit from one program to the other.

Estimate your tuition by using the Tuition Calculator

Learn about our General Education

Find out about transferring credits to this degree

About the Space Physics Program

END_OF_DOCUMENT_TOKEN_TO_BE_REPLACED

Growing up, Chanel Davis remembers being inspired by the movie “Hidden Figures,” which highlights a team of Black female mathematicians at NASA whose work was critical to…
END_OF_DOCUMENT_TOKEN_TO_BE_REPLACED

Eagles Take on a Leadership Role at Aviation Cybersecurity Summit

Similar to a mouse racing through a maze, making “yes” or “no” decisions at every intersection, researchers have developed a way for machines to swiftly learn…
END_OF_DOCUMENT_TOKEN_TO_BE_REPLACED

Just as a rock thrown into a pond creates an undulating pattern of circular ripples, some double star systems called binaries can push rings of dust into space as one star orbits around…
END_OF_DOCUMENT_TOKEN_TO_BE_REPLACED

What if vehicles could be assembled in space without human supervision? What if autonomous spacecraft could conduct routine maintenance and inspections on satellites, while flying in…
END_OF_DOCUMENT_TOKEN_TO_BE_REPLACED

When an airplane and a bird collide, the situation can quickly turn into a crisis, even yielding deadly consequences. That explains why three student presentations — two of which…
END_OF_DOCUMENT_TOKEN_TO_BE_REPLACED

Nykyri, a professor of physics and associate dean of Research and Graduate Education in the College of Arts and Sciences on Embry-Riddle’s Daytona Beach Campus, will serve on a Congressionally mandated committee assigned to assess U.S. heliophysics research priorities and progress.

Bachelor of Science in
Astronomy & Astrophysics

Bachelor of Science in
Spaceflight Operations

Bachelor of Science in
Engineering Physics