The decline in the immediate postwar years saw Embry-Riddle struggling.  However, perseverance and ingenuity allowed the school to survive and remain on the cutting edge of aviation education. By the early 1960’s, the school was expanding once again and was quickly outgrowing its facilities in Miami. Embry-Riddle’s newly-elected president, Jack R. Hunt, made the decision to move the school out of Miami and started a search for a new home. 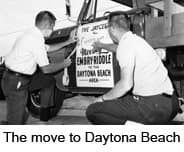 In 1965, under Hunt’s leadership, Embry-Riddle made its historic move from Miami to Daytona Beach in "Operation Bootstrap." Accreditation as a full service university soon followed and, in 1970, the school had a new name, Embry-Riddle Aeronautical University. The school was to expand once again when a second residential campus was opened in Prescott, Arizona in 1978.