Pilot's MBAA Pays Off as His Cookie Company Takes Flight Alumnus Chris Welch (’08) is a pilot for a major U.S. airline and an entrepreneur who runs his own cookie company. (Photo: Chris Welch)

What began as a way to battle boredom has become a booming business for a pilot who has seen the ups and downs of the aviation industry firsthand.

Although Chris Welch (’08) has resumed his career flying for a major airline after being grounded by the pandemic, he is also now piloting a growing business as head of Aviator Cookie Company in Midland, Mich.

His new venture, which features fresh cookies made with his own special recipes, was launched with the help of a foundation Welch built while earning his MBAA at Embry-Riddle Aeronautical University.

“One of the main things was that it gave me was confidence,” said Welch, 42, of his Embry-Riddle experience. “I got the background in what it takes to start a business. My education helped convince me I was up for the challenge.”

Welch is the 14th member of his family to earn a pilot’s license, but his flying career got off to a rocky start. He began his initial training class with a regional carrier a week before the Sept. 11 terrorist attacks.

He eventually managed to land a job as a corporate pilot in Kansas, where he knew no one. Boredom began to set in between trips, and he took refuge in a cookbook his mother had sent him.

“I started baking just to pass the time,” he said. “And I started getting better at it.” 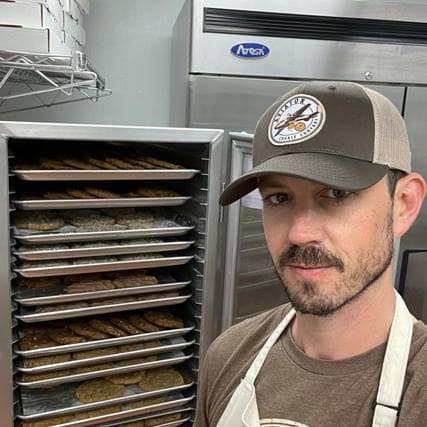 When he’s not on the flight deck, Chris Welch can usually be found baking treats for Aviator Cookie Company. (Photo: Chris Welch)

He also decided to follow the advice of his father, a pilot for Northwest Airlines, who told him he would enjoy his aviation career a lot more if he “didn’t need it.”

Although he had started flying again once the 9/11 aftershocks finally wore off, Welch enrolled in Embry-Riddle’s MBAA program, took classes online and graduated in 2008.

By 2020, he was flying international trips for a major U.S. carrier. Then the pandemic hit, and Welch was grounded again. He knew exactly what to do with his idle time.

“People had always told me I should sell my cookies,” he said. “And I knew I was ready to start a business.”

Dusting off lessons he learned at Embry-Riddle and at Western Michigan University, where he earned a bachelor’s degree in Marketing, Welch initially studied several other possibilities.

Then, driving around Midland one day, “my daughter told me that when she grows up, she wants to own a cookie shop. It was the motivation that I needed.”

Aviator Cookie Company occupies a downtown storefront in Midland and now sells between 400 and 500 cookies a day. The shop also has an aviation touch, sporting the wing of a rare 1955 Beech Twin Bonanza as a countertop.

Welch is back to flying his regular schedule, so he’s balancing trips abroad with running his new company, managing his employee team, and spending time with his two children. It’s not always easy, but so far it has been rewarding.

“Right now, I am making dough,” he said during a recent interview. “I have a trip coming up and I need to make a lot of dough before I leave.”

Welch is also planning to branch out into online sales and offer his cookies to a wider audience.

“I didn’t want this opportunity to pass by,” he said. “I want to look back at the pandemic and see that I did something positive with the time it gave me.”

Aspiring entrepreneurs need to “do the groundwork” and get the essential education they need to succeed, Welch said. After that, though, it’s all about “taking the plunge.”

“The hardest part is often that first step,” he said. “If you’re prepared, you have to just dive in and do it.”